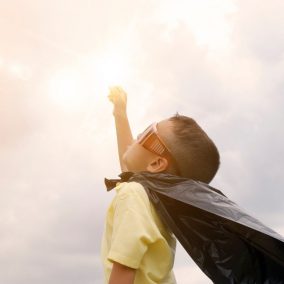 A volunteer in a sensitive country organized a small camp for children and later followed them up. After they had met several times, a boy called her and said that he had unintentionally told someone about the camp. Knowing that the authorities would most likely come to visit her, she immediately took time off from work, rushed home and removed anything that might incriminate her, and it was just in time. When they searched the house, they couldn’t find anything.

But also, the home of the boy was searched.  And the police officer took the boy into the car and drove him to the Police office.

The parents of the boy were known for their bad lifestyle. Father and grandfather are strong drinkers and often violate public order. His mother suffers, but does the same. The children are often hungry, dirty and missing school a lot.

But at camp through the Bible lessons the Lord had touched the boy’s heart. He had accepted Jesus as Lord and Savior.

And now in the police car the boy started to talk to the officer about God. He said that one should stop drinking, stop smoking and stop doing bad things. But without Jesus it doesn’t work.

The boy told the policeman, “We must receive Jesus into our hearts and He frees you from sin. If Jesus saves you, then when you die, you will come to the Golden City. But if you do not accept Christ as Savior, you won’t be in paradise with Him.”

For some time, the policeman listened to him attentively. Then he braked sharply, turned around and brought the boy home.

He later said to a sister: “I couldn’t listen to this boy any longer. I know his family very well and how they live. If their Christ can change people’s lives in this way, I didn’t want to oppose it. We could not change this family, although great efforts were made. Through the boy God himself began to work in them. I am a man and could not hold back the tears when I listened to the boy.”

God can use children as His ambassadors!