There Really Are Gooney Birds

“Honk! Honk!” A gooney bird sitting in the road on Midway Island has stopped traffic. Thousands of gooney birds, known as albatrosses, live on this speck of land in the Hawaiian Islands. It is the nesting home for Layson and Black-footed Albatrosses. Over 400,000 nests cover the ground. One person’s front yard has 25 nests! 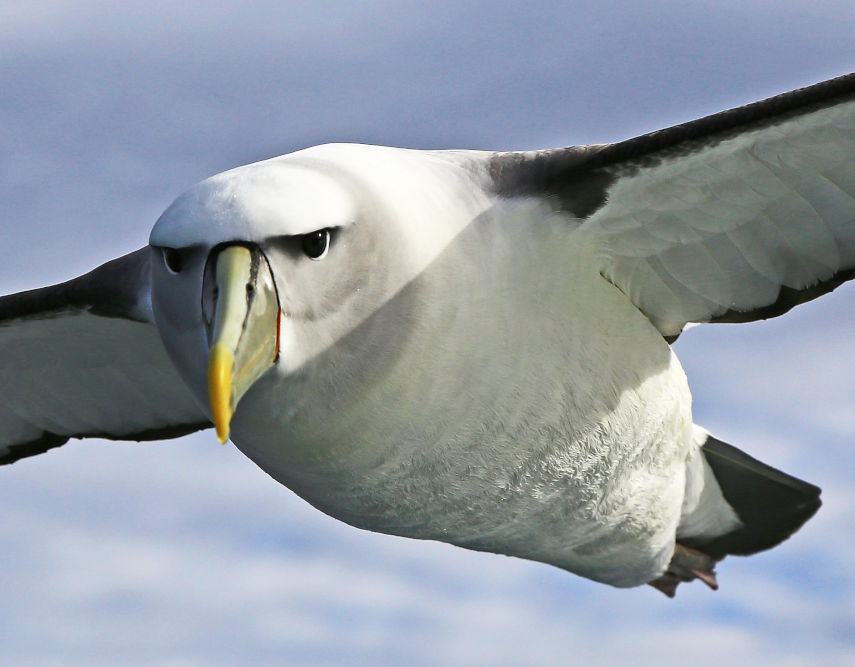 In mid-November albatrosses arrive to find mates. They perform their famous dance which includes much wing flapping, bill clapping, tiptoeing and sky-calling (pointing their bills at the sky and “mooing”). After the dance they are mates for life.

The female lays one soda-can size egg each year. During the next two months both parents care for the egg. First the mother flies off for two to three weeks to find food while the father egg-sits. Upon returning the mother nudges the male off the nest. He doesn’t want to leave but being hungry, off he flies.

Where do male and female albatrosses go? That’s what scientists want to know. Some albatrosses are tracked by transmitters glued under their back feathers. Scientists discovered that albatrosses fly hundreds of miles over water seeking the right feeding place. They eat floating fish, squid and flying-fish eggs. They also eat things like toothbrushes and children’s toys that are thrown from ships. Ocean pollution is a big problem for sea life.

How does the albatross take a load of food back to the nest? God created this bird with a two-part digestive tract. The first part digests and separates food. Oil separates from the food and floats. Water and other stuff sink into the second part, becoming the meal for the bird. When a large amount of oily fat is stored the albatross heads for home.

Do albatrosses use the stored fat for energy to fly? No! They can fly for hours, even days, without flapping their wings. Our Creator gave them the knowledge for using wind to fly. God also gave the Great Albatross an incredible wingspan measuring 11 to 12 feet, making it the world’s largest seabird. Other albatrosses have a six or seven-foot wingspan. (Spread your arms and measure your “wingspan”!)

Glider-like wings of the albatross catch the wind so the bird swoops and soars over and over like riding a roller coaster at speeds close to 70 miles per hour. The downhill speed gives the power to climb up and catch high ocean winds. These strong seabirds have the strength to fly like this throughout their lives—30 to 50 years.

Traveling around 300 miles per day, the albatross returns. It’s feeding time! The chick opens his beak and is ready to receive the oil stored by the parent.

Daily the growing chick flaps his wings and practices taking off and landing. His big gooney-bird feet cause much stumbling and tumbling. When his wings finally catch the wind he flies over the ocean and it will be over three years before he returns to land. About age seven, albatrosses return to the same nesting area to find a mate and build a nest.

The albatross reminds us that God provides food for His creation in many different ways.