They came for an Independence Day celebration and found spiritual freedom instead. 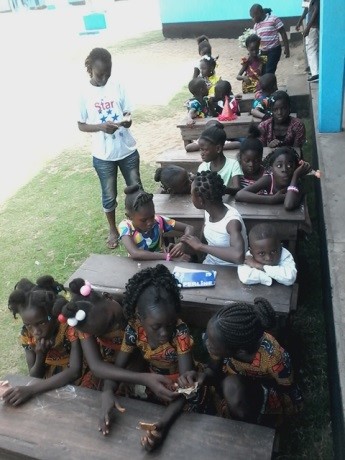 When Liberia celebrated its 170th Independence Day on July 26, 2017, it was a big deal. As the first African nation to gain independence, people from all over the country gathered together to celebrate. In Buchanan, the third largest city in the country, more than 500 children were part of the festivities.

While the Independence Day celebrations are filled with parades, special programs, food, and outdoor games, the time also holds hidden dangers. Many children learn how to smoke and drink and get lost from their parents. They roam the streets unsupervised, and some find their way to the beach alone and end up drowning in the sea.

During the celebration, Good News Club® of Liberia had the opportunity to present an indoor program, where children from different GNC groups sang songs, recited Bible verses, and gave dramatic presentations.

During the celebration, Good News Club® of Liberia had the opportunity to present an indoor program, where children from different GNC groups sang songs, recited Bible verses, and gave dramatic presentations. Teachers also presented a Bible lesson that contained a clear message of the Gospel. Afterward, 82 children chose to pray to receive Christ as their Savior!

Thanks to friends of CEF, these children were able to celebrate more than just their country’s independence that day—they could celebrate their newfound freedom in Christ!

Liberia is one of the poorest countries in the world. Eighty-four percent of the population lives below the international poverty line, especially in rural areas. Many children don’t have access to a sufficient and balanced diet. Only one in four has access to drinking water, 40 percent suffer from malnutrition, and one in five is undernourished. Because of a very high maternal mortality rate, many children die along with their mothers before they’re even born or they’re born without a mother to take care of them.

Sixty-two percent of primary-aged children are out of school—the highest proportion in the world. Female genital mutilations are still commonplace and aren’t formally prohibited by national law. Seventy percent of rape victims are girls ages 10–16—and they decline to testify against their attackers for fear of being rejected by their families and communities.

Currently, Liberia has 478 Good News Club programs. Until last year, they were between 200 – 300. But thanks to Operation Untold Millions, an initiative of CEF Africa that strategically places CEF workers in remote villages in Africa and sends them material, the ministry in Liberia is growing.

As a result of the Operation Untold Millions, CEF Liberia also grew in the number of teachers and prayer partners. We now have 645 teachers and 130 prayer cells around the three counties CEF is strong in. Because of the growth, our rallies and other programs are very rich and exciting.

Help Children in Liberia and other countries hear the Gospel

Children in countries all around the world are responding to the Gospel just like the children in Liberia. Together with your help, we can see hearts and lives changed for eternity in nearly every country of the world. Give today and help children hear about the love of Jesus.
Give to CEF