Teaching the Divisions of the Bible: Other Letters | Sunday School Solutions

Business letters, acceptance letters, personal letters, letters of recommendation—there are many kinds of letters someone can send or receive. Last time, we talked about Paul’s Letters but those aren’t the only letters in the Bible, there are others. Want to guess the name of the division of those other letters? If you guessed “Other Letters,” you’re right!  Keep reading for tips on how you can teach this division to the children in your Sunday school class!

We’ve looked at the Gospels, Church History, and Paul’s Letters divisions of the Bible. The Other Letters division is made up of eight books: Hebrews; James; 1st and 2nd Peter; 1st, 2nd, and 3rd John; and Jude.

While Paul’s Letters were written to a church or person, the Other Letters were not. Like the books of Paul’s Letters, Hebrews was named according to the group it was written to—Hebrew (or Jewish) believers. The other seven letters in this division, however, aren’t named for those the letters were written to. Instead they are named according to who wrote them—James, Peter, John, and Jude. All the books in the Other Letters division teach many valuable lessons the kids in your children’s church need to know.

Reassure the children you teach that even though Hebrews was written to Jews, it is for believers today as well. It shows Jewish believers that Christ is far better than the Old Testament ceremonies. It shows Jesus as our High Priest and as the perfect, final sacrifice for sin and what that means for believers. Hebrews has many wonderful truths you can teach the kids in your children’s church class! Have fun showing children the Hall of Faith in chapter 11, which points to the faith of Old Testament believers like Enoch, Abraham, Rahab, and more. Take time to review who these believers were with the children. A fun way you could do that, and at the same time help them understand the concept of the Hall of Faith, is to ask the children to name famous people they think should be in a Hall of Fame and discuss why the children think those people should be there. Write those names on a whiteboard or poster board. Then ask the children what Bible characters they think should be in the Hall of Faith. Discuss with the children how those characters showed faith in God and how believers can learn to have faith like they did.

The book of James was written by Jesus’ half-brother to the Jewish believers who had scattered to escape persecution. James teaches many valuable lessons, including to “count it all joy” when facing trials. Remind the children in your Sunday school class that they will face hard times, but that God is with them through those trials. Also tell the children how James shows that wisdom comes from God, and that He gives it to all who ask.

Remind the children in your Sunday school class that they will face hard times, but that God is with them through those trials.

Peter was known as the Apostle to the Jews, and he knew the sufferings of Jesus. Peter himself was persecuted, but he knew to “rejoice insofar as you share Christ’s sufferings” and to look forward to the joy that would come at Christ’s return (1 Peter 4:13). In the book of 1st Peter, he encourages believers to live for Christ, setting their hope on the assurance of eternal life. In 2nd Peter he stresses the return of our Lord Jesus Christ and encourages believers to grow to know Jesus better and be more like Him. For lessons you can use to teach about the life of Peter, check out the God: The One to Follow lesson series available from CEF Press®. 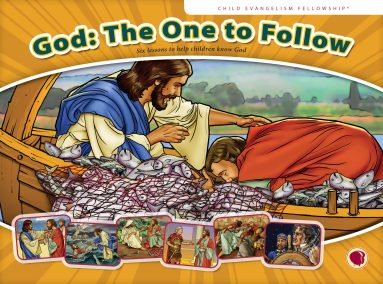 1st, 2nd, and 3rd John are all written by the same John who wrote the Gospel of John, and he addresses himself as the disciple whom Jesus loved. John’s three letters address many things, including the love God has for us and how we should show our love for God by obeying Him and loving others.

Finally, Jude, who was also a half-brother of Jesus, wrote the last book in the Other Letters division. In this short letter, Jude challenges believers to fight for their faith and be prepared to stand for God, while also trusting in God to keep us from falling.

There are so many wonderful things within these books that we can’t even begin to discuss here, so make sure you read and study the Other Letters division of the New Testament for yourself! For a fun activity you can use to help the children in your Sunday school learn the order of these eight books, check out the game below!

You might recognize this game idea from last time, when we shared how you can review the order of the books in Paul’s Letters with the children you teach. This game not only works well for teaching the Paul’s Letters books, but also for teaching the order of the Other Letters books of the Bible, too! For this game, you’ll need eight envelopes and eight index cards. Label the envelopes one through eight. Then, write the name of one of the Other Letters on each index card until you have a card for each book. Randomly place the index cards inside the envelopes and have the children in your Sunday school class work together to place the cards in their correct envelopes, so they match the order found in the Bible. For some friendly competition, make a second set of envelopes and index cards and divide the kids into teams to race each other and see who can correctly rearrange the cards into the envelopes the quickest! If you’ve already played this game when teaching Paul’s Letters, you could add in the set you made for that division to this one, that way the kids can review the order of both Paul’s and the Other Letters of the New Testament!

We’ve now gone through the Gospels, Church History, Paul’s Letters, and the Other Letters divisions of the New Testament—be sure to join us next time as we finish this series and look at the last division of the Bible, Prophecy.

If you need lessons for teaching about the early church, you can find them at CEF Press.