Score One for Public School Kids 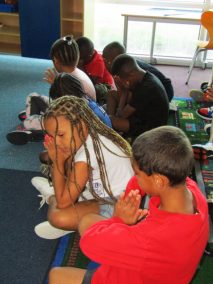 WARRENTON, Mo., Jan. 21, 2020 /Christian Newswire/ — People of faith are celebrating this week, and none more than the teachers of nearly 5,000 Good News Clubs in the nation’s public schools. On National Religious Freedom Day, January 16, President Trump signed new guidance rules to protect, among other things, freedom of prayer in public schools. He was surrounded by students who have suffered discrimination and even persecution.

Every week, about 170,000 students pray in elementary public school classrooms in Good News Clubs organized by Child Evangelism Fellowship. While these after-school CEF clubs are growing exponentially overseas, the going is tough in the USA due to misconceptions about religious practice inside public school walls.

Atheist organizations intimidate schools and cause confusion regarding Jefferson’s famous phrase, “wall of separation between church and state.” The phrase assured the Danbury Baptists the government would not interfere with their practice, but it’s often turned around as if meant to keep religion out of public life.

“It’s not legislation that needs to happen, it’s education,” says CEF of Washington State Director, Jeff Kiser. “Although we have over 100 clubs in the state, we’re trying to get one club in each school district, to complete the education process in all districts.” Starting clubs requires jumping through several permission hoops during which a school can throw up obstacles. Kiser’s staff members are taught to insure that Good News Clubs are not discriminated against compared to non-religious clubs regarding access or school claims about space and meeting times. Once clubs are established, principals report satisfaction with positive effects on the study body.

Good News Clubs must have the same access other clubs have. A case went to the Supreme Court to confirm this equal access (Good News Club v. Milford School District, 2001), demonstrating that without vigilance, religious rights are eroded.

The updated Guidance on Prayer in Public Schools issued by the Department of Education is a good reminder to those who need a refresher. The new rules require education agencies to certify they have “no policy that prevents, or otherwise denies participation in, constitutionally protected prayer.”

Kay Davis led a Good News Club of up to 200 students in Braselton, Georgia before becoming the state’s CEF Education Director. The club meets in a gym to hold all the children who attend with their parent’s permission. “I have personally prayed with many children and seen the profound impact on their lives. It’s not a luxury–it’s vital that they be able to take their needs to God.”

Child Evangelism Fellowship is an international, nonprofit, Christian ministry that has been teaching the Bible to children since 1937. CEF has 400 offices in the USA and is organized in most nations of the world, with over 3,500 paid staff and hundreds of thousands of volunteers. In its last ministry year, CEF ministered to 25.5 million children in its face-to-face teaching ministries.