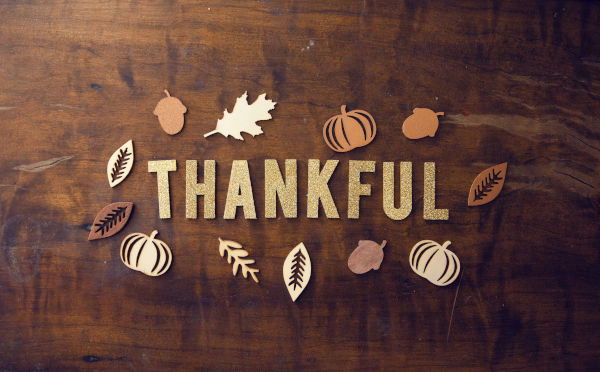 Keys to a Happy Thanksgiving Day

Your Thanksgiving gathering may be limited to your immediate family this year, but you can do some things to make it especially meaningful, maybe even start some new traditions. Here’s some keys to a great Thanksgiving for your kids.

Let’s start with CRAFTS. Kids love having the opportunity to get creative, and crafts are a great opportunity for you to help reinforce the truths you’re teaching them. One craft you can do is a classic small brown paper bag turkey. Two orange triangles serve for a beak, one under the flap and one on the flap, so kids can make the turkey open its beak and squawk. On each construction paper feather that goes around the top of the bag, have them write something they are thankful for.

After they’ve finished their craft, take some time to let the children say a thank you prayer to God for the things that are on the feathers to remind them that all these wonderful things come from God.

Talk to them about how they can be thankful for these things all year round, not just during Thanksgiving.

Next comes the GAMES key. A game you can play is a Thanksgiving twist on Hot and Cold. You’ll need a visual of a Bible verse about thankfulness and a small toy for the kids to hide. Have one child stand behind you, facing the wall with their eyes closed. Have another child hide the toy in the room while everyone says the verse to cover any noise. As the first child tries to find the toy, have the children recite the verse louder when they’re “hot” and softer when they’re “cold.”  You could use verses like Psalm 107:1, “Oh give thanks to the Lord, for he is good, for his steadfast love endures forever!” Or 1 Thessalonians 5:18, “give thanks in all circumstances; for this is the will of God in Christ Jesus for you.”

An easy game you can use anywhere is a Thanksgiving round of Hot Potato. Have the kids pass around a bean bag or any available object as the “hot potato” while you play some music in the background. When the music stops, the kid holding the “potato” shares something he’s thankful for. To help get the game rolling, you can also have categories to help the kids narrow it down. For example, you can tell them to share a food they’re thankful for in one round and an animal in another.

Did anyone say they were thankful for something difficult that happened this year?

Take note of anything said that can be a springboard for a good conversation after the game. If you’re playing the game at a family gathering, mix the adults in with the kids so everyone gets to share together. There will be some unexpected sharing that can turn into a very special family time. Normally families go around and people say what they’re thankful for, but mixing in the game will keep the kids more engaged. Encourage them profusely for their contributions. At the end, ask if anyone has something to share that they didn’t get to share.

Did anyone say they were thankful for something difficult that happened this year? If not, have another round where we say what hard thing we are grateful for, because God did something good in my heart through it, or God used it to draw people to Himself. Expressing this kind of gratitude is a great example for the kids in the family or a good testimony for those who need encouragement.

We can’t forget to be corny on Thanksgiving and be thankful for the TURKEY.

And don’t forget the corn pudding! May God bless your day whatever it looks like.