What can one do for the Gospel in only two weeks of outreach?  That, as it turns out, is the wrong question. What can God do? Amazing things!

God chose 29 Child Evangelism Fellowship® workers from six countries for this special two-week evangelistic outreach to the children of Jamaica. We prayed that God would work mightily through our team to reach 3,000 children in four parishes and to hold a devotional time or Good News Club® in the primary schools that had been adopted by local churches. However, God had a much greater plan than we even imagined! By the end of Good News Across Jamaica, God had opened the doors to 72 schools and a total of 9,976 children heard the Gospel. At least 115 children were counseled one-on-one for salvation and countless others responded to the invitation. 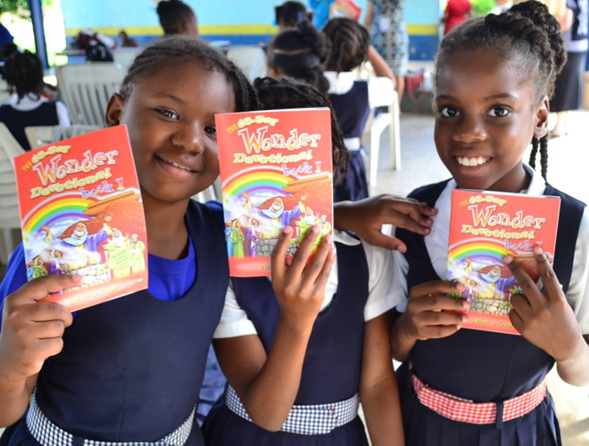 God opened more schools than were originally anticipated and more churches caught the vision and wanted to be part of this outreach. Pastors in two parishes where we did not even plan to minister asked if we would train their church members and help them reach their schools. Now children in six parishes are being reached with the Gospel through CEF®!

But God was not yet finished! He burdened the hearts of two pastors and both submitted requests to be CEF directors in areas where there was neither committees nor directors. A businesswoman felt called to sell her two businesses and become the director for her parish.

Participants were so eager that even heavy storms did not stop them. On the Saturday morning of training rain poured down, flooding the streets. The scheduled driver was quite late picking up the team and when they finally arrived at the church, people were standing outside locked doors. The person who was to unlock the church was not able to get there. The team wondered what to do because people kept coming for the training but there was no place to go. They decided they would hold training in the hallway right next to the street. People gathered on the steps and also lined both sides of the hallway. The trainers used a vendor’s table for teaching materials and borrowed chairs from various shops on the street for older people to sit on. Some traded off sitting and standing. Eighty-five people were crammed in the hallway and up the stairs! Most stood the entire three hours of training. No one left!

The support of the local CEF committee in St. James and the national office was a great encouragement. May, who serves on the local committee said, “Deep in my heart when I heard of Good News Across Jamaica, I said to myself, God is turning things around. He is showing us it is time to get the children in. I have a sense that 2016 will be a phenomenal year.”

“Deep in my heart when I heard of Good News Across Jamaica, I said to myself, God is turning things around. He is showing us it is time to get the children in. I have a sense that 2016 will be a phenomenal year.”

How Can I Get Involved?

There are several opportunities to be involved with a Good News Club.  You can pray for the children and teachers in the club. Become a club teacher or helper by contacting your local chapter and asking about training and opportunities. Read more.